Review: Six EP by Chad Painter of The Other Paper

The Stepford Five has definitely read up on it's Columbus rock. In the past (like on The Art of Self-Defense), the Bowling Green immigrants have tried and failed to find their version of the Columbus sound. Instead, they have had to settle for being Columbus's answer to the Afghan Whigs, which isn't such a bad consolation prize.

On Six, TS5 has finally found its voice.

The album kicks off with 'Are You Dreaming,' a mix of great angular descending riffs and a play on the soft/loud dynamic. Tim Minneci sings, 'I always wondered why/ We failed when we tried/ To hold on.'

The title track has a great stuttering drumbeat and big power chorus that could fit nicely in an arena near you. The band sounds like a cross between Watershed and a more radio-friendly Pretty Mighty Mighty, while Minneci sings, 'Find a way to be yourself/ That's all I'm asking for.'

Elsewhere, 'Fair is Fair' is a slice of alternative rock of days gone by, and 'Pinhole' sounds like a slowed down mix of Soundgarden and Pearl Jam.

Six sounds like a band coming into its own. My only complaint is that it's so brief (clocking in at under 18 minutes). Oh well, guess it's just a taste until the full-length in the fall.

Review: Six EP by Stephen Slaybaugh of the Columbus Alive

With 2001's The Art of Self-Defense, the Stepford Five began to move away from the '90s indie guitar-rock influences displayed on its debut, Mesh, stretching a gauze of effects and half-remembered conations over their incendiary emissions.

The band's new EP, 6, which is being released by newly formed local label Reverbose (run by members of the Stepford Five and Miranda Sound) removes such artifices for a more defined sound. The aesthetic works well for the four-piece, placing its components - propulsive drum pounding, icy riffs and Keith Jenkins' careening voice - in sharp relief. In general, the Stepford Five bears a certain resemblance to Bush for their bombast and Jenkins' vocals' similarity to those of Gavin Rossdale. Theirs is a big noise that moves with undeniable and inexhaustible force and drama. 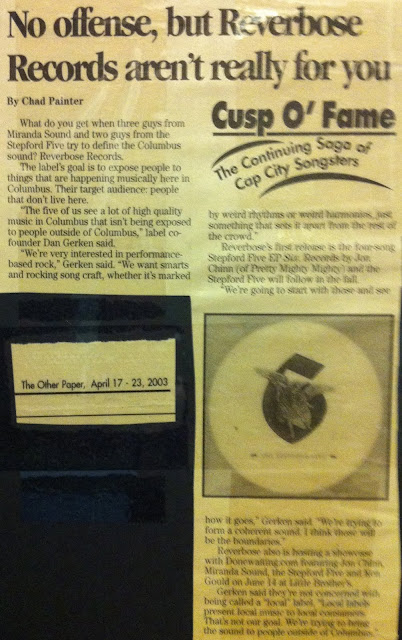 Email ThisBlogThis!Share to TwitterShare to FacebookShare to Pinterest
Labels: 2003, alive, article, review, six, the other paper